A few shots from the first (annual?) Lawrence Buskerfest

North vs. South moved to Kansas City after an initial four-year run in Kansas. As a result, I didn't go see The Meat Purveyors tonight. They're one of my all-time favorite bands, especially live, but technically they're broken up. They get back together every year for North vs. South. I couldn't get myself to drive to Kansas City for the show, though, especially given the festival's history of poor scheduling and the fact that this year's venues are all spread out halfway across a much larger town. (I'm OK with, say, moving a band across the street from the Replay to the Jackpot, but I'd hate to get parked at Davey's and find out the band I wanted to see got moved at the last minute to the Record Bar.) Also, no smoking ban? What century do you live in, Kansas City? I kind of feel like I need to be peeking out my window in case Quantrill makes a repeat visit.

Enough bagging on North vs. South, though. I'll probably break down and go tomorrow night to see Grant Hart, the much-unappreciated other half of the Husker Du songwriting dynamic and crafter of many an excellent post-Husker song on top of that. And hopefully the festival will move back to where it belongs, on the banks of the Kaw, this time next year.

That's not what this post is about, though. Instead of hosting North vs. South, our town is playing host to Lawrence Buskerfest, a cavalcade of street performances stationed at various spots along Mass Street. We caught a few of the acts after we ate dinner. Unfortunately most of the acts were of the blink-and-you'll-miss-them type; the fire-eating/sword-swallowing act everyone was so excited about was over and done with by the time we left La Parilla. 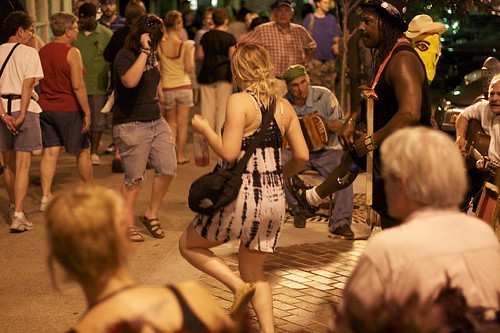 I got a few good shots of a zydeco band set up at 8th and Mass, though. It was three dudes (guitar, accordion, washboard/vocals, papier mache fellow). This girl came along and I'm not sure if she's a formal member of the band or not, but she played tambourine like she'd been practicing with them for years. Here's a slideshow of my photos from the event, if you'd like, with better shots of the other band members. If you know who these guys are, please let me know.

The fire-eaters perform again Sunday afternoon. I'll try to get down there in time.