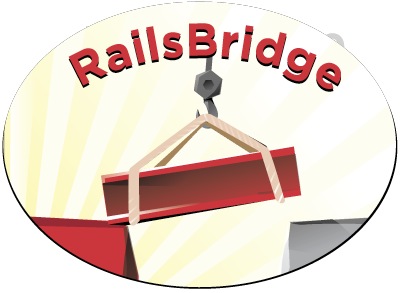 Now this is awesome. In light of the [negative publicity hit Rails–n-the-gogaruco-mess.html), a band of developers who would rather accentuate the positive things happening in the community–and show what kinds of positive things a community is capable of doing–have launched the RailsBridge effort. The RailsBridge community will educate, mentor, and inspire while keeping things friendly and inclusive.

Ever since I started using Rails I've believed it would be perfect for teaching newcomers to software development multiple facets of the game, from database modeling to scripting to user interface design (not to mention newer facets I need to work on myself like behavior-driven design). And as I've mentioned in the past, my Rails projects aren't going to win any awards for the traffic they generate, but they are testament to the fact that you can write quality applications quickly using the framework. With that in mind, I hope I can contribute by helping others who are in a similar boat, while also learning from those who've achieved greater things using Rails.

Want to get involved? Most of the activity appears to be happening on the RailsBridge Google Group right now. Pick a project or two and do what you can to help!

A big thank you to Mike Gundleroy for the idea, and to everyone else who helped get this off the ground so quickly.