To close out my notes from my trip to Austin for South by Southwest Interactive 2009, I'd like to touch on my other objective for the week: To sample as much barbecue as possible. I made it to three local smokehouses (or two smokehouses, and one auxiliary location): 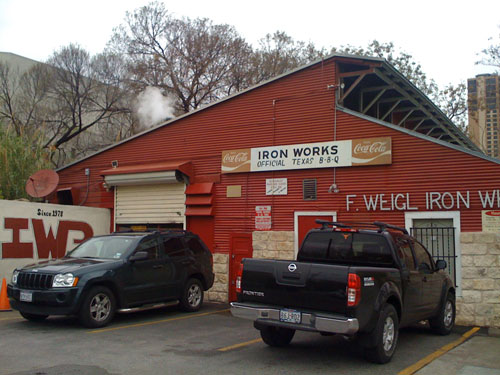 First up: My first meal upon arriving in Austin was at the Iron Works, conveniently located downtown, next to the convention center. Good beef ribs. Great sausage. Good sides. Good sauce, Good ambiance. This place had a line out the door every day during the actual conference. 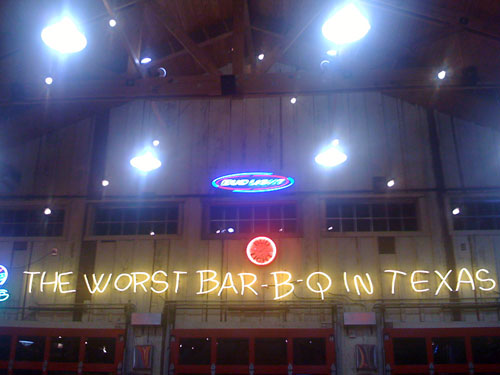 A few nights later: Rudy's, located in a convenience story-type building somewhere at the south end of town. Best. Brisket. Ever. And super-friendly service, quick with the samples–I've never really had creamed corn until the other night. Good sauce, too, and an ice-cold Lone Star washed everything down real nice. In sum: Awesome. This was my best Texas barbecue experience.

Heading out, I stopped at the Salt Lick location at the Austin airport. Yeah, it was at the airport–and I had it on authority from locals that you can't tell the difference between this one and the original, several miles out of town. The brisket and sausage platter I ordered was nothing to write home about. I'm hoping the airport version is just a poor representation.

At the end of the day, though, I'll take Bryant's in Kansas City (or Biemer's or Vermont Street in Lawrence) any day.