How I use Twitter at conferences (or, don't just read about it; do it)

Kansas City's SIDLIT conference is next week, and conference organizers are promoting Twitter use this year with numerous links to guides on "how" to use it. I'm not going to forward these links any further; most of them are academic and show little to no evidence that the people who wrote them have actually used Twitter in conference environments.

Academics think too much, if you ask me. The best way to figure this out is to do it. Rather than write a multi-page outline, backed by cited references and academic jargon, I'm going to distill what you need to do in as few steps as possible: 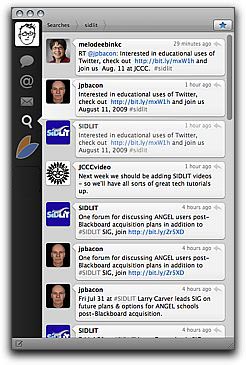 As for me, I plan on tweeting like heck during SIDLIT, at least when I'm not presenting. If you're interested, feel free to follow me at @ruralocity. See you Thursday!