The Bing ads are right. Search still isn't done. Or maybe it's just the Internet.

I have to hand it to Microsoft–or, more appropriately, the folks behind the ads for their new search engine Bing. You know, the ads displaying the results of "search overload:"

Isn't it rich that Microsoft uses YouTube, a Google-owned channel, to market this service? But I digress. Google results have gotten to the point that some of my more esoteric search queries (say, an obtuse, copied-and-pasted error message from a Rails app in development) yield increasingly fewer useful pages and increasingly more pages that may share a couple of keywords with my request, but little if any relevant information. I get:

Sure, I'm talking about specific, less-than-mainstream searches, but I would bet that nine times out of ten if you're looking for something more generic–say, an actor's name–two out of your top three returns will be the Wikipedia entry and the IMDb entry. If I wanted to search Wikipedia and IMDb, why not just go straight to those sites? This is just nitpicking, though; I'm sure for most searchers these pages yield exactly what they're looking for, because at least half the time they tell me what I need to know. It just smacks of laziness. 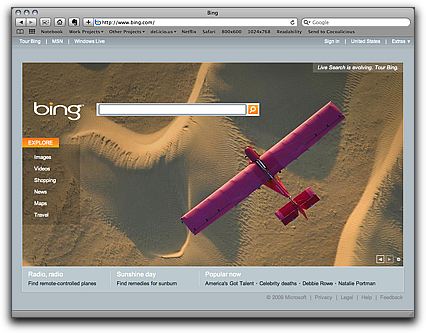 It looks like Bing is focusing on where Google currently lags the most, and I don't blame them. I don't know that Marissa Mayer's team of UI engineers care that Bing's a much prettier experience than Google's utilitarian approach to search, and at the end of the day it may not matter in the eyes of the casual web searcher, anyway. (How often do you go to Google's home page to search, as opposed to using your browser's search input?) And if Microsoft's real-time search beats Google's current attempts at rapidly indexing Twitter et al., it may matter, or it may not (at least for awhile; as long as real-time tools are treated as novelty by the media they'll be treated as such, Iranian elections and Michael Jackson be damned). But attempting to create better order out of the information that gets spewed back to us, even after we create well-thought, reasonably well-crafted search queries, is not "done," as many information technology pundits argue.

I kind of wonder if this isn't a job for some real, live, human eyeballs. I read an article the other day about search–I forget where–that mocked the notion of Yahoo's antiquated, human-indexed directory. I haven't used it myself in years, and building such indices of the web at large probably isn't the best way to spend content experts' time. Maybe Mahalo is closer to what I'm talking about, but I don't see it gaining any considerable traction unless it's bought out by one of the new Big Three of search (Google, Yahoo, Microsoft). Maybe communities such as the Rails developers of the world (I'm sure this isn't an issue specific to this relatively small group) should identify and encourage individuals with the knowledge and grace and humility to identify unanswered questions and help find answers to them. Or maybe someone can figure out a way to make an honest living by doing that, and everybody wins.

Call me altruistic, or even naive, but back in simpler times before SEO (or even LOL or OMG) where everyday lingo, these were the kinds of things we tried to do on the web–help people out, build trust and trust others' answers, advance the greater cause. We just didn't have to scour as many outlets to find the questions, or shake our heads at the levels of smugness (or laziness, or downright rudeness) of our fellow Internet users, or palm our foreheads as often from reading as much flat-out misinformation.

Maybe my growing disdain for what the Internet's becoming is starting to leak. Maybe I'm just getting older and crankier. Or maybe I've found something to keep me busy for a Ph.D. in library science/information management. Most likely it's one of the former.