My visit to McArthur Court

It’s hard to imagine that, in the year 2010, there’s a BCS school playing in an old gym like McArthur Court, home of the Oregon Ducks basketball program until this coming December. At that time McArthur will be replaced by Matthew Knight Arena. With a combined sense of nostalgia and urgency, I made my way to Eugene during the gloomiest time of the year to visit the Pacific Northwest to take in a game at the 83-year-old court–my first stop in what I hope becomes an ongoing series of visits to historic college basketball facilities. I’d seen lots of photos of the inside of McArthur Court, but not too many outdoor shots. It’s easy to see why—the building is not exactly photogenic; just a large, nondescript concrete building next to newer, fancier athletics facilities. You might think it’s just an old warehouse if not for the small, simple signs bearing its name, along with the current time and temperature. It may also be the only college basketball arena located next to a cemetery.

Walking inside Mac Court was possibly the closest I’ve ever come to walking into a time machine. Watching a college basketball game there is like watching a college basketball game in the 1930s: The narrow, tiled concourses are crammed with incoming fans and makeshift vending areas. Finding your seat requires winding your way up stairs, down wooded floor hallways, and through tiny, nondescript tunnels. As we approached the entryway to our section, I remembered that Oregon won the 1939 National Championship–notable because that year’s championship was decided by the very first post-season NCAA tournament. And sure enough, as we walked through the tunnel and into “The Pit” proper, we were greeted by the large banner commemorating the occasion . The scoreboards might be the newest features in Mac Court, having probably been installed in the late sixties by my guess. I’ve taken for granted the ability to glance up at a scoreboard and see how many points the current hot hand on the court has tallied. This is not possible at Mac Court. If you want to know how many points or fouls a player has, you’d better keep track of that yourself. I bet the guy selling scorecards cleans up on game day. And at least from our seats, the public address announcer was not of much help, as the voice coming over the antiquated sound system was muffled and mostly inaudible. 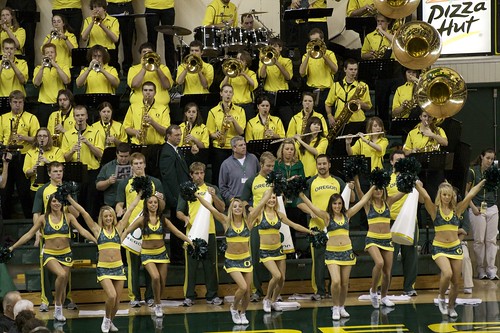 The lack of a sound system puts the job of supplying music squarely on the collective shoulders of the pep band. In fact, the only instance of piped-in music I recall was during a halftime performance of local grade school unicycle enthusiasts. Luckily, Oregon has a great pep band–their rendition of “Roller Coaster of Love” is the best pep band rendition of the Ohio Players’ classic you’ll ever hear, I guarantee. During pre-game warmups I was pretty sure I’d spotted former Arizona head coach Lute Olson, and I was right. As part of the ceremonial final year of Pac-10 basketball at Mac Court, each team was represented by an honorary captain. Coach Olson, pictured here, served as the Wildcats’ captain and received a nice ovation. (I stood and clapped myself, even if I am still a bit bitter of his 1997 Arizona team knocking my Jayhawks out of the tournament.) “Admiral” John Dick, a member of the 1939 championship team, did the honors for the Ducks. Teams don’t have tunnels to enter the court through so much as they have doorways. Prior to the Ducks’ entrance from the basement locker room, some yellow-clad students are ushered from their designated section to the entryway. These students and cheerleaders line the way from point to point to welcome the home team. The student section with the prime seats is small by other gyms’ standards. Students stand immediately behind the announcing crews and, for the most part, do a great job of keeping up with and being part of the game. The “USA! USA!” chant whenever Kyryl Natyazhko (an Arizona player hailing from the Ukraine) touched the ball was a little dumb, though, reminding me more of pro wrestling than college basketball. 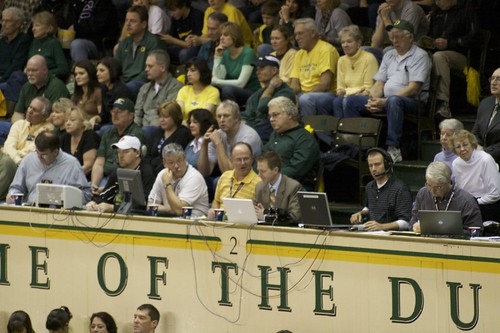 When McArthur Court was built, press row didn’t need to accommodate laptops or a gaggle of local and national newsmen. Now, reporters and their computers crowd a narrow ledge with power cables drooping toward the fans below. The only modern element of a basketball game at Mac Court is the uniform. Oregon is Nike’s flagship school (notable in particular for the seemingly endless possible combinations of football uniforms the company supplies for the school) and Arizona is a Nike school as well, meaning the young men on the court wear tight tank tops and odd, baggy bottoms that are less like shorts and more like bloomers. McArthur Court is known for its vertical seating arrangement. Tiers of seats go up and up. And up. From the top deck, sitting in old wooden bleachers, you can get an eye level view of the Ducks’ collection of banners. Look down for a bird’s eye view of the action on the floor. 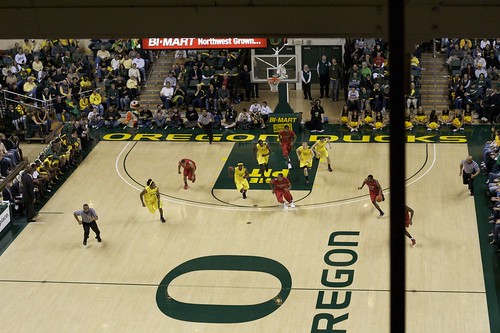 The game itself was nothing memorable. The visiting Arizona Wildcats started off strong and, for the most part, stayed in charge the whole time. Oregon fans, including much of the student section, made a mass exodus from the arena when the old clock showed two minutes remaining in the game and the Wildcats’ victory well in-hand. The Ducks, mired in a weeks-long slump (a fan behind me made the comment that an ensuing play was for the first lead they’d hold in two weeks; that lead didn’t happen), made a couple of runs, though. They even stormed back to tie a few times—and on these runs I got brief glimpses of what it might be like to really see a game at Mac Court, with wood floors creaking and ceiling fixtures swaying and a raucous, packed crowd of 9,000 fans looming over the court. I hope the old building gets a few more games like that before its curtain call this December. Matthew Knight Arena will no doubt pack all the amenities, but it will be hard-pressed to match McArthur Court’s simple charm and dignity. Want to see more? Check out more photos from my visit to McArthur Court on my Flickr account.