Last week I rolled out a new version of an old project. Over the years I’ve collected a number of promotional flyers from local concert venues in and around Lawrence, Kansas and Seattle, Washington. Since 2002 or so I’ve gone through a few attempts at sharing these online.

First was a pretty basic gallery of static HTML files generated by iPhoto and hosted on a .Mac account (now MobileMe, of course). This was fine for starters, but didn’t give me much control in terms of look-and-feel and definitely didn’t give me any ability to cross-index by band or venue. In 2005 moved things to a MovableType installation on DreamHost. To be honest, I only have vague recollections of this iteration, and remember more about the tedious uploading process than I do the end result. By backdating “posts” to the show dates, though, I was able to create a basic, searchable database of my flyers.

Next, in early 2008, I reworked everything into a WordPress-powered site. The addition of tags helped me index by band and venue, albeit in a slightly forced fashion. I also tried some design ideas I later regretted (specifically, a gigantic banner graphic that hid content from non-scroller-downers). At the end of the day, though, it was WordPress, and I don’t like WordPress, and it didn’t work exactly the way I wanted it to work, and as a seasoned web developer I should make something work exactly the way I want it to, right?

Enter Sound Refound. Nothing fancy, just a basic means of displaying a collection of media (in this case, images) and cross-indexing on some specific data fields (versus my generic tags approach in WordPress). The collection is small enough that I don’t think it warrants a keyword search; talk to me again if and when I have more than 200 artifacts in the database. 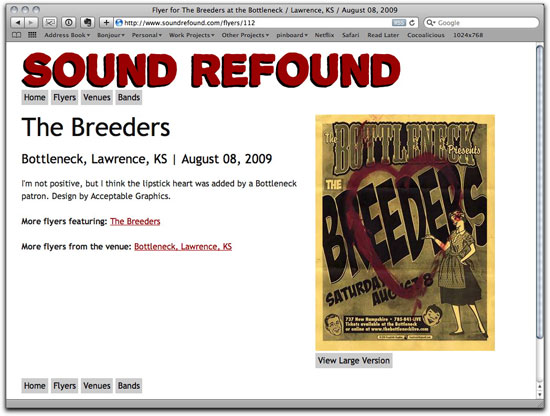 The application itself is pretty basic–just a straightforward Rails application with three models . The new thing for me with this app was the deployment–after realizing that running a Rails 2.3.x application on DreamHost was going to pretty much require installing my own copy of Ruby in my account I decided to finally take a look at Heroku for application hosting service. What can I say, other than Heroku just works. I’m really impressed with the deployment interface—just git push heroku master and you’re done, pretty much. The only snag I ran into was getting Bundler to work with Rails 2.3.x, so for now I’ve got my couple of gems I’m using installed as plugins. It’s working fine, but will be something to address eventually. I’m also using Amazon’s S3 cloud storage service to serve the actual flyer images, another first for me technology-wise. Just like Heroku, everything just works.

Since Sound Refound isn’t much more than a vanity project, anyway, I’m guessing S3 is going to set me back a few pennies a month (I’m also going with Heroku’s free level at the moment). It’s nice to be able to experiment with these technologies without being set back much cash, and it’s nice to have a little vanity project with which to experiment while I craft plans for thing(s) of a little more use to people besides me. Stay tuned?