Documentaries, storytelling, and The Endless Summer

I’ve been watching movies like a fiend this weekend, catching some titles that are at the end of their run on Netflix’s instant streaming option. Nothing cleans out a Netflix queue like an impending expiration. While I will admit to watching (and enjoying) my fair share of mainstream crap, I’ve come to actually, genuinely prefer documentaries. I’ve begun paying more attention to the styles used to tell real stories, and thought about what compels documentarians to choose their subjects. In an age when pretty much anyone can have their story told in an hour on an A&E Biography or VH1 Behind the Music (not even sure if that’s on anymore), I think being a genuinely good documentarian takes a little more than pointing a camera at your subject and letting them speak and hoping the story tells itself from there, through the voices of the people being followed, with the filmmaker playing the role of impartial observer, however well or poorly (Michael Moore, cough cough).

I’m no filmmaker, and aside from a couple of film studies classes I took at KU, really have no grounds to stand on when it comes to dissecting movies. I just know what I like. And this weekend, I took a shine to The Endless Summer, Bruce Brown’s 1966 documentary about two young Californian surfers who travel around the world seeking “the perfect wave.” They hit the beach in Africa, Australia, New Zealand, Tahiti, and Hawaii; interact with the locals; and generally go on an adventure that most who love world travel could only envy even today . 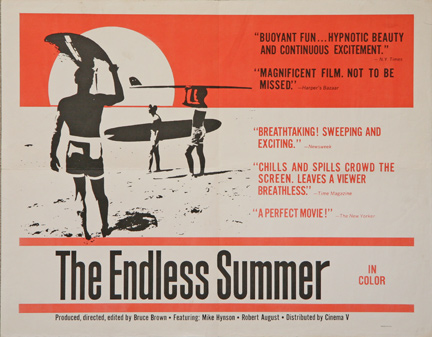 The format of the movie is probably what fascinates me the most. Being from 1966, it is much more like the educational reel-to-reel films I’d see in school as a kid, with no interviews from primary sources of Ken Burns-style image panning. The subject matter, and Brown’s easy-going, fun way of explaining it, set The Endless Summer apart from its contemporaries discussing the smelting process or the like. (I would have loved watching this film in school, 15 years or so after its initial release, for what it’s worth.) The words are all Brown’s, as he narrates the footage in a general style not unlike a 1960s wildlife documentary–that pack of wildebeests can’t speak for itself, so the filmmaker uses his own words to explain the situation and even put a splash of humanity in these wild animals. Brown shows his subjects on the waves and among the natives, but never asks them about their thoughts . Rather, his words mix with his visuals to tell the story from his point of view.

And how about those visuals? Again, I don’t really know anything about making movies, especially historically, but I imagine that much of this film was done on a budget and required highly portable gear. I don’t know if those factors lent themselves to this, or it was just the shots that Brown chose, but it’s almost like you’re in Brown’s living room and he gets out some video he shot with his home movie camera and projects it on a sheet he’s hung from the ceiling and talks about what is happening, all while a cool surf rock band plays in the corner of the room. No special effects; probably not even any color correction in post-production. Very authentic.

Could this movie be made today? My guess is no, at least not in this format. For starters, surfing is not the hot new thing it was 45 years ago–but besides that, it would take a gusty documentarian to hold him or herself accountable for what’s said, and not just craft and edit interviews together to convey a message. I also think the budget for a 2010 remake would be astronomical, with the equipment and crews necessary for professional, screenable, marketable, profitable results driving costs through the roof. I’d be more apt to imagine this as a scripted work, with a couple of up-and-coming young actors playing the roles of Mike and Robert. Sprinkle in a foreign, possibly forbidden love interest and maybe some sort of conflict threatening to rip their friendship apart (only for them to resolve in the last 15 minutes so they can team up to conquer the awesome, CGI-generated killer wave and/or rival surf gang), and I smell a hit!

If you’ve got a Netflix account, you’ve got through this week to catch The Endless Summer via streaming; otherwise, you can watch it the old-fashioned way and rent the DVD. Do you know of other documentaries like this? Are there rules or formulas taught to aspiring documentarians about the right way to tell a story, or am I being too critical? Or just overly appreciative of a filmmaking style long past its prime?